Eliza Newlin Carney is a Washington writer, editor and columnist specializing in political money and democracy issues. Carney is also founder and president of The Civic Circle, a nonprofit that uses music and drama to teach young kids about democracy and civic life. She is former senior editor at The American Prospect, and was previously a senior writer at CQ Roll Call, and a writer and columnist for National Journal. 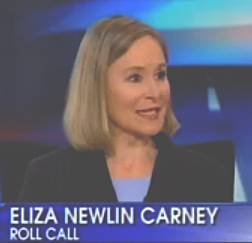 She has offered commentary as a guest on C-SPAN, CNN, Fox News, National Public Radio and the PBS NewsHour. She has been a panelist at the American Political Science Association’s annual conference; the Bipartisan Policy Center; the Brookings Institution; the Cato Institute; the National Press Club Speaker’s Bureau and the Sunlight Foundation, among others.

Carney’s writing has also appeared in The New Republic, Talking Points Memo, Sludge, The Fulcrum, and American Journalism Review, among other outlets. Carney previously covered Capitol Hill for States News Service, where her subscribing newspapers included The New York Times and The Evening Sun of Baltimore.

Carney’s other experience includes working as an adjunct journalism professor at George Washington University’s School of Media and Public Affairs. She has a Master’s degree from Columbia University’s Graduate School of Journalism, and a B.A. from Swarthmore College. Her work has been recognized by the Capital Press Women and the Philadelphia Press Association.